You didn’t build that… someone else did!!

You didn’t build that… someone else did!! July 26, 2012 RadioGuyJoe
Uncategorized

I found Barack Husane Obama’s comments very offensive when he said, “You did not build your business,  the government did.”

All I can say is where the hell was the government when I was working my butt off 14 hours a day, seven days a week. I could not afford to take a vacation or time off when sick.

How much of an investment did the government put into the business – nada (not one cent)! They just take.

While entrepreneurs are working their buns off to have the American dream, Obama was too busy smoking weed and dreaming of Marxism. His only accomplishment in life was a community agitator.

When you have an idea and want to pursue that dream, the government does everything it can to hamper you. (The only ones government helps is Solyndra (green energy) or  big bundlers (money) for Obama.) You sell what you can to raise capital, re-mortgage your house (if you can) just to take big risks to live the American dream. Not Obama’s American dream of welfare, food stamps and disability.

To bring it into perspective, the other morning I went for a mile walk. I was attacked by horse flies. I’d kill one, another would appear. I associated the horse flies with government. They are there for the free money through government regulations, taxes, compliance (A.D.A., etc.) fees and burdensome permitting.

The government is not there to help. It’s there to take everything they can (by hook or crook). They are like scavengers.

Also the government does not build the roads or bridges, the working taxpayers do. In fact, most of the major roads were started by the Indians or the pioneers. 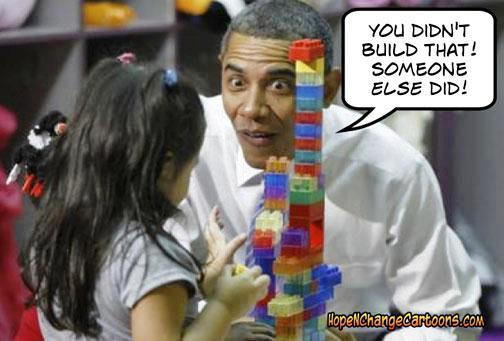