What I’ve learned from Andy Rooney …

If you will take the time to read these. I promise you’ll come away with an enlightened perspective. The subjects covered affect us all on a daily basis: 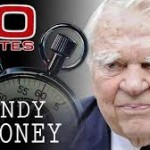