Home / Uncategorized / Under the Fedora St. Anselm Akin and Pinball

Under the Fedora St. Anselm Akin and Pinball

I’m writing today’s Under the Fedora at Funspot the Largest Arcade in the world.  I came up here with my youngest to relax and celebrate his new job.  The most relaxing thing I know is pinball but 4 hours of it can be murder on the hands.

The only news that seems to be on the table today is Todd Akin and his gaffe concerning pregnancy.  Akin’s story has dominated the news for several days during which the right was in dead panic and the left is positively drooling.

I can’t see either side avoiding them since both sets of traps are so well suited to their natures.

This single most amazing thing of the entire Akin business, at the same time the left is getting ready to go all out, all Akin all the time, their national convention features Bill Clinton as the keynote speaker.

I wonder if anyone has asked “Juanita Broaddrick” for comment?

Electorally it would have been better if Akin left the race but as the Lonely Conservative said:

I’m not all that comfortable removing a candidate who won a primary based on a gaffe but it will be  neat trick to see Akin try to pull this off without national support, but people seem to forget that none of the conditions that put both Barack Obama and Claire McCaskill on the endangered list have changed.  It remains to be seen if the people in Missouri will decide that a gaffe already apologized for is as bad as Claire McCaskill’s record.

BTW have you ever noticed that apologies are never accepted if they come from Republicans.  If you are  a democrat you can Sexually Harass interns in the White House and remain president, You can have your boyfriend run a call service from your apartment and remain in congress and you can avoid paying the taxes you owe become treasury secretary.

The letter D after your name apparently is stronger that the most expensive indulgence that the Catholic church ever sold.

Mitt Romney held his 100th Town meeting at St. Anselm College on Monday.  I was credentialed for the event and got some interesting interviews both before

As a rule events of this type are stage managed to a large degree but there was one moment that really bodes well for Mitt Romney & Paul Ryan:

Cheryl was an Obama voter, a former teacher who had never gone to a Romney event before. She left as a Romney voter. I asked her per, Gov Romney’s challenge, what she would say to a fellow 2008 Obama voter to persuade them to change their vote her answer was telling:

“All they have to do is listen carefully, there is so much negativity and there is no message in negativity“

Her dissatisfaction, more than any successfully staged event is the greatest danger to the election prospects of this administration.

I suspect this is being repeated a lot more often than people think.

This doesn’t bode well for the President, but the comic reaction when word passed through the press area that the president spontaneously showed up for the daily press briefing was much more telling.  One gentleman joked about the people called on:  First question Inside Edition etc. etc etc.

They might vote for him, but I suspect it will not be out of respect.

Three other St. Anselm notes:   I met Ambassador Joe Patrone for the first time.  I had no idea who he was and only approached him because he had one of the most stylish fedora’s I ever saw. 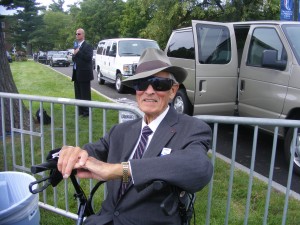 One really gets the seriousness of a “presidential” event when you see members of the Secret service on the roof of a building keeping watch. 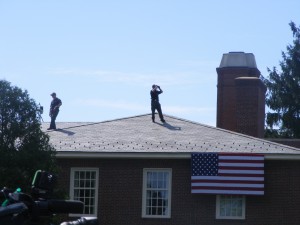 The last Romney event I showed up for a reporter’s power supply blew up, the secret service was there faster than you can say, “South American Call Girl”.

One of the volunteers at the event was a fellow named Peter who sat with me, Stacy McCain and Mike Rogers of Granite Grok at the bar earlier this year after the National Review debate event in Manchester.  He gave his take on things along with some of the background work that volunteers had to go through

It’s the volunteers who do the heavy lifting simply to help their candidate win.  They never seem to get the proper credit so if you were a worker at St. Anselm’s let me say.  Thanks, great job!

Oh and you can find the Q & A from the Romney Ryan event  here.

The Hollywood reports tells us that the anti-Obama documentary 2016 is raising eyebrows due to its popularity:

It’s already the No. 12 political documentary of all time — a market that Michael Moore has cornered — as well as the No. 2 conservative documentary after Expelled: No Intelligence Allowed ($7.7 million).

Ya think the American people might be trying to tell us something?

Oh and was there anything more lame that the Obama team trying to say to the NYT that they are drawing small crowds on purpose.  Talk about channeling Pee-Wee Herman:

A lot of people are snarking at Melky Cabrera for making a fake web page for a fake topical cream in order to avoid being caught using performance enhancing drugs.

Would you fake a web page to avoid losing that kind of money?

“But DaTechGuy” you might say,  “Why not just not use the drugs and keep the whole six mil?”  Well perhaps if it wasn’t for the drugs the Giants wouldn’t’ think he was worth six million.

People forget the kind of money that was, and is at stake in sports.  These men are unlikely to make anything near this kind of dough in their lives again and a single injury means it’s all over.  If someone told you, take this pill and you will make millions it would take a man of great character to refuse it.

One of the things you notice about Funspot is just how many different things there are to do from the old arcade games, to pinball, to Bowling (tenpin & candlepin) to mini golf to slots (all for tickets).  It’s a very family orientated place as you might expect from a business that has been around since 1964.

One thing that’s slightly older than Funspot is Dr. Who.  The latest season is starting in a week on BBC and BBC America.

It’s no secret that I’m a huge Dr. Who fan, but I think the decision to split the season in the way they did has really dropped my interest in the new series.  If that’s happening to me I’ll bet happening to a lot of other Dr. Who fans.

Of course the Big Finish series still excites me and I can’t wait for the 2nd Tom Baker season featuring Mary Tamm as the first Romana.  They finished recording the season before she died last month.

It’s amazing how Tom Baker seems to outlast just about everyone.

A former University of Nebraska women’s basketball star faked an attack in which she allegedly carved anti-gay slurs into her skin because she felt it would spark change, police said Tuesday.

I have nothing but contempt for this woman, for her cause she was willing to tar people as violent, even worse what if the police had picked up a person, that man’s live would have been over and she would have been the toast of the town.

Something sweet to close, after my appearance on WROL’s Out With Joe this Sunday we stopped for supper.  The desert tray had something amazing.

Believe it or not I actually managed to resist Chocolate Cannoli cake.