Under the Fedora: Polls Crowds & Grandparents

Strangest story I saw this week, the front page story of the Drug Dealer who is constantly putting up bail for his homeys

A drug dealer arrested in a large cocaine sting earlier this month has been using cash earned from the sale of drugs to bail out his alleged dealers and others involved in cocaine trafficking, according to police.

There is a Poll out of Pittsburgh showing only a two point gap between President Obama and Mitt Romney, strangely enough while the Pittsburgh Tribune is talking about this poll and the Lonely Conservative has written on it, the MSM hasn’t said a word.

If you can explain to me how Barack Obama is a shoe-in yet is only up 2 pts in Pennsylvania you’re a smarter man than me.

Speaking of explanations there is a general rule that if you are ahead, you tend to go to states that your opponents might have a lead and start to make a move to force them to use resources in states they normally would not.

That being the case can someone explain why he was campaigning in Milwaukee Wisconsin?  Just last week the media was telling us he was up 14 points in this state?

Meanwhile the there is a poll the MSM has not had any problem reporting on:

The surveys, which had margins of sampling error of plus or minus three percentage points for each candidate, also included a Pennsylvania poll, where Mr. Obama is leading Mr. Romney by 12 percentage points.

Being a calm and rational type I took the liberty of looking at the internals of this poll and discovered two things that didn’t make sense:

In Ohio & Florida  Mitt Romney is leading among independents

Mitt Romney is getting 91-92% of the republican vote

So you have the media oversampling the Dems to the nth degree and the president campaigning in states that are supposedly safe, with interesting results

The pavilion was not “filled”–a local reporter for Patch.com filmed empty seats in the bleachers at the side of the arena (see above). Nevertheless, the Journal-Sentinal played it safe, putting attendance at roughly 5,000-plus, a small but respectable turnout.

That’s not how national media covered it. Darren Samuelsohn of Politico reported that the president addressed “a crowd the Obama campaign estimated at 18,000 in a city park overlooking Lake Michigan” in an attempt to “lock up” Wisconsin.

Laura Meckler of the Wall Street Journal–whose news section, according to UCLA professor Tim Groseclose, is the most liberal of any major mainstream outlet–repeated the campaign’s 18,000 claim without even revealing the source of the official-sounding estimate.

I’m typing this paragraph on the ground in front of a podium in Atkinson NH waiting for the GOP candidate for Governor  Ovide Lamontagne & NJ Governor Chris Christie who will be speaking to a crowd that a bit over 200 as of the time I sat down on the blacktop. 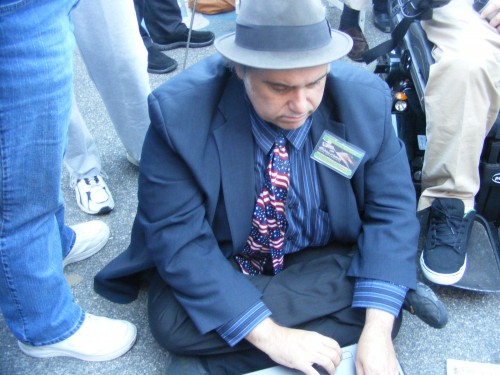 You don’t hear a lot about NH in the MSM, I suspect that’s because the news out of the state is not going to be very good for the left

One of the people I ran into was Tom Duggan

Tom didn’t like how the MSM and the newspapers were covering the news, so he started a paper of his own.  It’s a monthly called the Valley Patriot and he does a lot of the leg work himself.

Speaking of the NH Race living in Massachusetts I see all the NH commercials as we share a media market including the ads for Democrat Maggie Hassan.  Of course I say “Democrat” because I’m able to confirm that online, if you were looking at her ads you would have no idea what party she belongs to or who the current president is.

When I see Maggie proudly touting the name Barack Obama THEN tell me how good he is doing in the polls.

Have you heard of my subscription only commentaries?  For as little as $2 a week you can get premium commentaries not available to the public.  Here is the teaser for this week’s bit

The full version is here and just the price of a Starbucks coffee away.

One of the best parts of the episode is the use the character of Rory’s father (Played brilliantly by Mark Williams of Arthur Weasley fame).  With Amy & Rory leaving next episode I’m thinking it’s a crying shame he wasn’t introduced earlier.

Finally I mentioned Chris Christie’s speech I have the full think linked above but the close is so incredible that it deserves it’s own clip:

Remember this image as is leave, everybody feels this same way about this no matter what state you live in.

This is about will our children be able to raise their children here where we grew up right?  So in New Hampshire for all of you who love this state and helped to build it, what’s going to happen? if we don’t make the change that needs to happen, if we don’t elect Ovide governor and go in that course

They’re gonna to leave where that becomes available And then you are going to become airplane grandparents and you won’t make those little league games not all of them, or those soccer tournaments or those Christmas concerts or spring plays and worse yet you won’t make  those little birthday parties around the kitchen table which is where the fabric of our life is woven

If this kind of speech was given in Massachusetts years ago, maybe we wouldn’t have 5 less electoral votes then when I was born and I wouldn’t be advising my kids to move away.