Warning: Cannot modify header information - headers already sent by (output started at /home/content/60/8824460/html/irentmyhome/index.php:2) in /home/content/60/8824460/html/irentmyhome/wp-content/themes/blackoot-lite/functions.php on line 483
 Under the Fedora 2-21-13 – The Joe Mangiacotti Show
Home / Uncategorized / Under the Fedora 2-21-13

I’ve been watching the constant attacks on Marco Rubio for drinking water coupled with the hits on Ted Cruz for daring to question Chuck Hagel and the outside money that he won’t disclose details on.

It’s been fascinating to see the media continue to embrace this while doing their best to shield Senator Mendenez.  CNN actually ran 8 minutes in prime time defending Menendez on the hooker side and downplaying the corrupting side the “everybody does it” argument.

It’s amazing the indulgences you get in media when you have that D next to your name.

Sissy Willis put out a tweet on Senator Cruz on Wednesday that says it all: 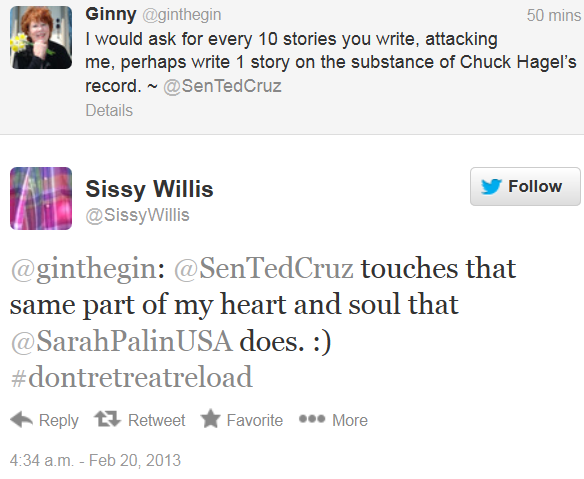 If you want to know why Ted Cruz is hated or feared by the left.  This is why.

On the same subject Morning Joe argued Tuesday that Rush Limbaugh had hurt republicans because Democrats had won 4 of the last six presidential elections.  Actually republicans are 3 for seven in elections since Rush was syndicated but here is a better measure.

Both Joe Scarborough and I are going to be fifty this year.  From the day we were born till Rush Limbaugh went on the air happens to be 25 years, half our lives.  During that time GOP controlled the House of Representatives exactly 0 years and the senate 6 years.  At no time did the GOP control both houses of congress.

I’ll make that trade any day of the week and twice on Sunday.

Interesting story out of NY,  Katherine Connell at National Review notes  Mayor Bloomberg has “won” in his confrontation with School Bus Drivers in NYC.  The drivers returned to work but apparently He might have done even better for the city if the Bush Strike Continued for a while:

NRO reports the city’s contract pays $7,000 annually per student to get them to school and back.

Personally If I was a New Yorker I’d offer to take 4 Kids to school every day for them at $14,000 a year even at 3 hours per school day that would come out to $25.92 an hour for 3 hours work., but lets get more creative.

If you offered students $20 a day if they got themselves to school and back without city help how many do you think would do so.  In fact how many would make SURE they didn’t miss a day or drop out if they knew, they could get a $20 for just showing up?  Or even better lets say parents had a deal where they could get $3500 deposited annually into an UGMA account for kids if they got them to school on their own.  Over the course of 12 years that $42,000.  Enough for an inexpensive community college or enough for a youth in a trade to start his own business.  Meanwhile NYC  would save $500,000,000

It would make for an interesting study wouldn’t it

Talking about Schools a while back Massachusetts was debating a “Transgendered Rights” bill a while back.  Opponents nicknamed it the Bathroom bill and talked about girls being forced to shower with boys etc and they were dismissed.  The Transexual rights bill was passed by the legislature and signed by the Governor on Jan 19th 2012 supposedly with the “shared bathroom ” aspects of it removed.

However with elections safely won by democrats in November what could not be supported by legislation politically has become the rule in Massachusetts.

The Massachusetts Department of Education on Friday issued directives for handling transgender students, including allowing them to use the bathrooms or play on the sports teams that correspond to the gender with which they identify.

The document said whether a student identifies as a boy or girl is up to the student or, in the case of younger students, the parents.

While the subject is snarkworthy:

Who needs a hole in the wall of the girls shower anymore? In Massachusetts all you need is a teenager desperate enough to see actual naked girls in the shower and viola you have access, and if those girls cover up, or scream or run into a stall to avoid you, remember THEY are the ones being unreasonable:

Got that? If you girls don’t totally welcome Pee Wee into your locker room you are a BULLY and we all know how bad bullying is!

these are the actual guidelines issued by the Commonwealth of Massachusetts Education Department!

This bill is the logical extension of Gay Marriage, after you redefine what marriage and INSIST that those who don’t agree are bigots redefining what boys and girls are is no great leap.

People on the left, particularly Mike Barnicle have constantly said with snark “how does gay marriage effect you.”  Well now you know and it only took nine years.

If you are a parent of daughters and send them to a Massachusetts public school my advice is to get them out before high school and perhaps before middle school if you can financially swing it.

I’ve been writing a series on George Washington and why he remains the greatest president and greatest American who ever lived.  The first three parts  here, here and here with one more on the way.

Washington is lost in the politically correct time we live in but consider one thing, he willingly gave up power twice, once after the revolution and once as president?  What pol today do you think would do the same?

A psychic opened up shop on the Fitchburg Leominster line.  I’ve always laughed at that kind of thing.  I always figured a real psychic would have won a lottery and retired once they figured out they had any such gift but what I’d really like to see is someone open such a shop and as soon as a person walks through the door says:  “Yes he’s cheating on you $20 please”, or “no you don’t want to quit $20 please.”

It would be interesting to see how many people would fork over the $20 given something like that.

I have to admit this story made me smile:

The malware had been designed to attack Mac computers.

The same software, which infected Macs by exploiting a flaw in a version of Oracle Corp’s Java software used as a plug-in on Web browsers, was used to launch attacks against Facebook, which the social network disclosed on Friday.

The malware was also employed in attacks against Mac computers used by “other companies,” Apple said, without elaborating on the scale of the assault.

For a very long time, I’ve been a big critic of those who recommend Mac because “they are safe from virus”.  The truth has always been the only reason why you didn’t have a lot of malware for Apples was they were such a small segment of the market and the Willie Suttons of the net went where the computers were.

Now that Mac’s profile has grown they have become targets and a lot of people who never bothered with anti-virus software because they had Macs are going to be burned.

And remember your “smart phone” that’s a computer too so be careful.

As time has gone by we’ve more details on Pope Benedicts physical condition I find myself wondering less and less why he decided to retire and more and more wondering if he will live to see retirement.

Finally I was pleased to see Bonnie Langford back in on Big Finish doing audios with Colin Baker after a very long absence, but have we really reached the point where we are doing paradoxes inside of paradoxes?

I blame Steven Moffett.  This is his vision of Doctor Who , in small does it’s fine  but as Faye Dunaway said in the Classic Move Little Big Man about working in a brothel:

if I was married and could come here once or twice a week,… …it might be fun, but every night is just boring

I sure hope things change with Dr. Who before it becomes boring.