UNITED NATIONS — The world is making progress on items ranging from human rights to global warming, President Obama said Wednesday, but all of that could be undone by the largest threat: extremist violence. 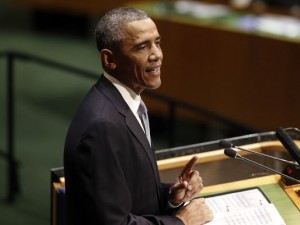 In his annual address to the United Nations, Obama urged all countries and religions — especially Islam — to reject the extremist ideologies that fuel bloodshed and threaten global stability.

“As we look to the future, one issue risks a cycle of conflict that could derail so much progress,” Obama said. “And that is the cancer of violent extremism that has ravaged so many parts of the Muslim world.”

The president’s annual visit to the United Nations came the same week the United States began airstrikes in Syria against the Islamic State, one of the extremist groups cited by Obama. Attacks continued Wednesday. Last month, the president authorized similar strikes against the militant group in Iraq.

USATODAY
Air war in Syria could last years
The escalation prompted some critics to question whether the United States is the right country to address the problems of global violence.

Iranian President Hassan Rouhani, speaking on CBS’ This Morning, protested the attacks in Syria, saying, “No terrorist group can be eradicated and destroyed through aerial bombardments.”

The threats of extremism dominated Obama’s crowded schedule Wednesday, the second of three days of U.N. meetings. It included an Obama meeting with the new prime minister of Iraq and a special U.N. Security Council session devoted to the problem of “foreign fighters.”

The council passed a resolution requiring countries to crack down on the recruitment of fighters who could move to other nations to launch attacks. That includes efforts to shut off financing for terrorist groups. To that end, Obama’s Treasury and State Departments announced sanctions on 24 groups and individuals they say have aided the movement of foreign fighters.

Intelligence agencies estimate that more than 15,000 foreign fighters from 80 countries have traveled to training bases in Syria in recent years, Obama told the Security Council.

Addressing the U.N. General Assembly, Obama defended the Syria and Iraq airstrikes that have targeted the al-Qaeda-affiliated Khorasan group, as well as Islamic State positions.

Citing the Islamic State’s record of violence, which includes beheadings of hostages, Obama told the delegates, “The only language understood by killers like this is the language of force.”

Obama used the words “fanaticism,” “hate” and “evil” to describe the Islamic State, condemning it as a “network of death.”

President Obama labels the Islamic State extremist group a “brand of evil” in an address to the United Nations General Assembly. “There can be no reasoning – no negotiation – with this brand of evil. The only language understood by killers like this is the language of force. So the United States of America will work with a broad coalition to dismantle this network of death.” In 2013, President Obama references mass shootings as “acts of evil” while discussing gun-control proposals. “While there is no law or set of laws that can prevent every senseless act of violence completely, no piece of legislation that will prevent every tragedy, every act of evil, if there’s even one thing we can do to reduce this violence, if there’s even one life that can be saved, then we’ve got an obligation to try it.” In 2002, President George W. Bush refers to Iran, North Korea, and Iraq as an “axis of evil” in his State of the Union Address. “States like these, and their terrorist allies, constitute an axis of evil, arming to threaten the peace of the world.”

In 1983, President Reagan labels the Soviet Union an “empire of evil” in an address to the National Association of Evangelicals. “So, in your discussions of the nuclear freeze proposals, I urge you to beware the temptation of pride – the temptation of blithely declaring yourselves above it all – and label both sides equally at fault, to ignore the facts of history and the aggressive impulses of an evil empire, to simply call the arms race a giant misunderstanding and thereby remove yourself from the struggle between right and wrong and good and evil.” In 1860, President Abraham Lincoln calls slavery “evil” in his Cooper Union Address: “This is all Republicans ask – all Republicans desire – in relation to slavery: as those fathers marked it, so let it again be marked, as an evil, not to be extended, but to be tolerated and protected only because of and so far as its actual presence among us makes that toleration and protection a necessity.”
Next Slide

The United States has assembled “a broad coalition” to defeat the militants, including Arab states, Obama said. He cited plans to train forces in Iraq and Syria to carry the fight on the ground against the Islamic State and other jihadists. He said, “We will neither tolerate terrorist safe havens, nor act as an occupying power.”

In calling on Muslims to denounce extremist ideology, Obama said a lethal group of terrorists “have perverted one of the world’s great religions.”

Thomas McDonnell, a professor of international law at Pace Law School in White Plains, N.Y., said it’s commendable for Obama to speak out against global extremism. The challenge, he said, is that many people around the world see the United States as a longtime backer of repressive regimes, especially in the Middle East.

“We are not exactly a neutral arbiter,” McDonnell said. “It’s a complicated situation.”

Obama’s speech was in sharp contrast to his U.N. address last year. Then, he spoke of ending “a decade of war” that included Iraq and Afghanistan and having the United States shift away “from a perpetual war footing.”

Though “we have our own racial and ethnic tensions,” Obama said, the United States has “worked to address our problems, to make our union more perfect.”

But Obama also spoke of a “pervasive unease in our world” about events such as the Ebola epidemic in West Africa and Russian aggression in Ukraine — and terrorism.

“We come together at a crossroads,” he said. “Between war and peace, between disorder and integration, between fear and hope.”