This was published in The American Prosperity News 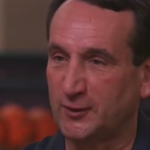 It’s not everyday you wake up to a story where one of the most successful men in all of sporting history decides he’s going to slam the President for being a major coward.

Coach Mike Krzyzewski has led the Duke Blue Devils to 5 NCAA championships. He’s also represented the stars and stripes internationally when he served as the U.S. Basketball team Olympic coach. That, and he’s the first coach in NCAA Division 1-A history to net 1,000 wins.

To say he knows what it takes to lead would be an understatement.

And even though he is no politician, he’s still uniquely qualified to speak on issues of foreign policy because of his brilliance as a basketball strategist (and because of his time spent in the military).

Coach K was set to receive an award at the Army awards conference when he decided he was going to use the podium to denounce how Obama has been leading our men and women in uniform.

He sympathized with our nation’s military leaders and acknowledged how frustrating it must be to have a commander in chief who isn’t willing to help keep our nation’s protectors safe by refusing to put boots on the ground to fight ISIS.

“I know it’s upsetting to many of you when you hear ‘no boots on the ground,’” Coach K said. “It upsets me too because that’s like saying I’m not going to play two of my best players.”

Taking a page out of his own book, he extrapolated how his time leading men’s basketball teams to outright victories parallels leading our military.

He articualted, “It’s about letting your opponent know that we are going to use our best players. Now whether you use them or not, that’s up to the coach. You never tell an opponent you are not going to use them.”

What many aren’t aware is Coach K isn’t just a brilliant basketball coach, he’s also a veteran. That means his frustrations with Obama aren’t just philosophical, they’re deeply embedded in his core. He’s a graduate of the U.S. Military Academy and served in the violent Vietnam war from 1969-1974.

So it’s not like Coach K’s just pulling strategy out of thin air when he goes on the attack.

In closing, he made sure to let those in attendance know just how thankful he is for their continued service to our fine country.

He said, “I want to thank you for the countless times your boots have been on the ground, and as a result have given me an opportunity to live in a free country, to do what I want to do, to coach the United States team, the Duke team, whatever,” he said. “So on behalf of the ordinary people, we love you and thank you for doing that.”

If you like what Coach K said here, you might remember back to 2009 when Obama picked North Carolina to win the NCAA championship (they eventually did win). Coach K told the media he wished Obama would spend more time fixing the economy and less time filling out a bracket.

Good on you Coach K.