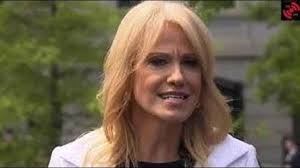 Kellyanne Conway took questions from reporters and said today, for President Donald Trump, is “the best day since he got elected.”
She touted the findings in the report as showing “none of us got in their way” and added, “We’re accepting apologies today too for anybody who feels the grace in offering them. There was no collusion and there certainly was no criminal conspiracy with any Russians.”

One reporter noted that “the only clear that the obstruction of just piece wouldn’t in essence stick was because a lot of people around the president wouldn’t do what they had asked him.”

Conway dismissed the “punditry” and said, “If the president asked me to break the law today, I would walk out the door.”

She said Trump “could have fired Mueller” but didn’t. “Intent matters,” Conway added, before saying the press wants to “cherry-pick one line here or one line there.”

Conway was also confronted about the “false information” given from Team Trump about Russian contacts and whether they have any regret about it.

Conway again said “total exoneration” and called out claims being made by people on the networks, like Adam Schiff, making claims about collusion.