I think it was Will Rogers who said “there is a little truth in all humor” January 18, 2018 RadioGuyJoe
Uncategorized

YOU’VE GOT TO LOVE THIS RANCHER’S OUTLOOK AND COMMON SENSE APPROACH TO LIFE……
While suturing up a cut on the hand of a 75 year old rancher, whose hand had been caught in the gate while working his cattle, the doctor struck up a conversation with the old man. Eventually the topic got around to Obama, and his being our president.
The  old rancher said, “Well, ya know, Obama is just a Post Turtle.”
Not being familiar with the term, the doctor asked, “What’s a “Post Turtle?”
The old rancher said, “Well, when you’re driving down a country road, and you come across a fence post with a turtle balanced on top, that’s a post turtle.”
The old rancher saw the puzzled look on the doctor’s face so he continued to explain. “You know he didn’t get up there by himself, he doesn’t belong up there, he doesn’t know what to do while he’s up there, he sure as heck ain’t goin’ anywhere, and you just wonder what kind of dumb ass put him up there in the first place.” 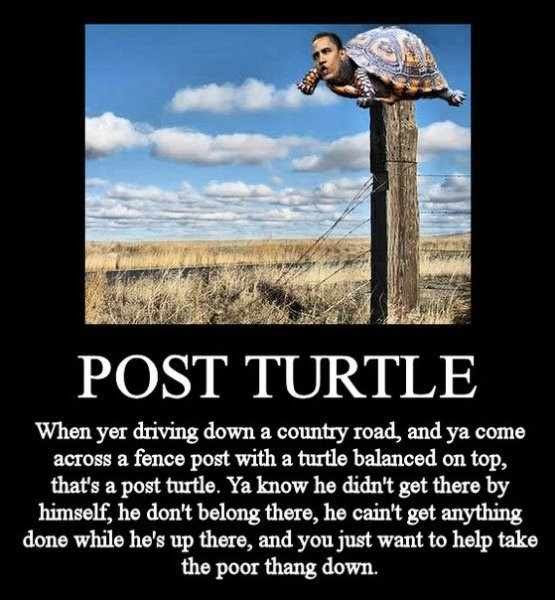