He’s not a member of the KKK.. he’s my brother!

He’s not a member of the KKK.. he’s my brother! December 28, 2016 RadioGuyJoe
Uncategorized 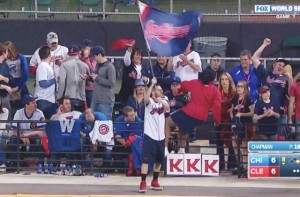 Let’s be clear, the “K” in baseball means a strike. It always has and for as long as baseball has been around we’ve denoted each strike with a big K on a placard and we’d hold it up. To millions of baseball fans all over the world this is a time honored tradition and has been passed on from generation to generation.

You wouldn’t think a pitcher doing well and getting three strike outs would cause a problem, but the overly active imagination of the political police are always looking for problems where they don’t exists. We saw this recently when during the world series the tradition of “K”s for each strike out was held up.

The problem here folks is the PC police see racism everywhere. And instead of taking the seconds it would have taken to inquire or even Google the meaning of the Ks at a ballgame. They run with their ignorance and start to tweet and post.

So a Mom who had her three children at the game was so excited when the third strike was thrown. Having three kids, each to hold a “K” up was the perfect time to snap a picture and post up to social media. How could she be so careless, so racist, so oblivious to the glaring travesty she was about to commit?

Her children probably had no idea what the KKK is or the horrific meaning behind those three letters in another place and with intent. This was a family fun time and the those kids were having a great time and Mom was so happy to have this time with her children, I’m pretty sure.

But, yup you got it. She got attacked on social media. How could she do this, what a horrible mother! Now this women did remove the post due to the pressure and the fact that now she has to explain to her children why she had to. These kids could have gone a great deal longer with blissful ignorance of who and what the KKK was.

Christmas Eve at my family’s house (whatever sibling we happen to be at that year) has a no politics discussion rule. This is, in the big picture a great idea. However politics comes in many forms, don’t they now?

As I sat at my sister’s dining table sipping on my overly strong eggnog and eating way too many sweets I’m half listening to the “Corporation” drag on. Now I should point out I have three sisters and no bothers and many years ago my brother-in-laws began affectionately referring to the three sisters and my Mom as the “Corporation”. This was perfect, for they, without questions decided how everyone else behaved, where to spend holidays and what was an acceptable point of view. Not being married and the only male offspring, I don’t think I am eligible for membership in the corporation. And I have no idea how this would work, if I was to marry a female would she become part of the corp? Do you have to be blood and female? But I digress.

The discussion involved my left leaning progressive younger sister telling how she gave it good to a mom who had the audacity to post a picture of her three children holding strike out cards at a ball game.

I, eggnog confidant, spoke up and shared my thoughts. No, you don’t understand… a “K” at a ballpark referrers to the pitcher’s strikes! Has nothing to do with the KKK. Voices went up and all three turned their attack on me. I was told in no uncertain terms, with great arrogance and sense of superiority, that I was wrong.. I may think I am right.. but trust me I am wrong.

I decided as I do so many times it’s not worth arguing ignorance. When the mob mentality has decided they are right regardless of how out of touch and disconnected to the given situation they are I let it go. They will dig their feet in and argue how morally correct they are.

My thoughts going to the fact that if you are watching a ballgame and something as innocuous as cheering for a ball player and all you see is hatred and racism, it says more about you than the kids or the proud Mom who posted the picture. It tells me your are the racist because you see everything in terms of race. This is how you view the world. I’d rather live in the world where those three kids are cheering for their pitchers success and a K, no matter how many, mean exactly what they intended to mean.

But I wondered. The next day at Christmas at the older sister’s I asked my 30 year old nephew his take on the “K”s being held up. He saw no harm in the post. He couldn’t understand how you can jump from the ballpark tradition to the vitriol towards this poor Mom. I asked my housekeeper the next day. She too understood the meaning of the Ks and could not see how you would jump to that anger. She even commented her and the other Moms held a K or two in her day and never paid any attention to whether they were holding three or not.. they held however many strikes there were.

So many of the overzealous twitter geeks were quick to correct their posts and realize how badly they read the situation at the World Series, hopefully my siblings have enough sense, grace and class to do the same.