Home / Uncategorized / [GunLawReform] Liar Rosenthal gets dozens of free billboards. Time to rally against clear channel outdoors and the others.

[GunLawReform] Liar Rosenthal gets dozens of free billboards. Time to rally against clear channel outdoors and the others.

[GunLawReform] Liar Rosenthal gets dozens of free billboards. Time to rally against clear channel outdoors and the others. April 3, 2015 RadioGuyJoe
Uncategorized

John Rosenthal, founder and president of Stop Handgun Violence, in front of the landmark billboard along the Massachusetts Turnpike.

John Rosenthal, founder and president of Stop Handgun Violence, in front of the landmark billboard along the Massachusetts Turnpike.

The Newton nonprofit that for two decades sponsored the eye-grabbing billboard along the Massachusetts Turnpike that inveighed against gun violence is promising to keep that message fresh in the minds of motorists with a new series of targeted ads.

Beginning Tuesday, Stop Handgun Violence will be “saturating” highway signs at three-dozen locations across the state, an interim solution until cofounder John Rosenthal finalizes construction of the Fenway Center complex over the turnpike.

The new highway signs being installed this week will read, “We’re Not Anti-Gun. We’re Pro-Life. Massachusetts Gun Laws Save Lives,” and feature a Bushmaster XM-15 assault rifle, with a white surrender flag poking out from the barrel.

Billboard space was donated by Clear Channel, Logan Communications, Total Outdoor, and Outfront Media, Rosenthal said. All but four of the signs will be on digital displays.

“It will be huge coverage,” Rosenthal said. “Having billboards all over the state that are literally positioned to have maximum exposure from the highways is a huge win.” 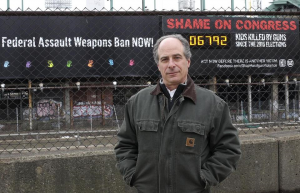 After 19 years, the Newton nonprofit Stop Handgun Violence is looking for a new location for its 252-foot-long billboard.
Billboard must seek new home

The campaign comes as Rosenthal bids farewell to the iconic 252-foot-long billboard affixed to the Lansdowne Street parking garage he once owned.

The large billboard was given a March deadline for removal, after Rosenthal sold the garage to the Red Sox’s parent company in 2013. He expects the sign will come down within the next 30 days.

‘That billboard campaign I started . . . is as close to a kid as I have had, and it’s hard letting go.’ –John Rosenthal, Cofounder of Stop Handgun Violence
Quote Icon
An estimated 150,000 drivers a day have cruised by that billboard, taking in variations of the message plastered there for 20 years.

“It’s sad. I don’t have kids, and that billboard campaign I started . . . is as close to a kid as I have had, and it’s hard letting go,” Rosenthal said.

To launch the latest campaign, Rosenthal said he called billboard companies across the Commonwealth, who offered their services.

“When we realized he would no longer have his . . . billboard to get out the message about gun control, we offered to utilize some of our space,” said Stephen Ross, president of the Boston division of Clear Channel Outdoor.

“It was easy for us to make a huge impact on such an important message.”

While Stop Handgun Violence, which pushes to reduce gun deaths without banning firearms, has seen considerable support for the latest campaign, some people aren’t too keen on the new signs.

Jim Wallace, executive director of the Gun Owners’ Action League, the state affiliate of the National Rifle Association, laughed at the words and imagery used for the billboard when a reporter described it.

“I don’t know what a white flag has to do with their message,” he said.

Wallace called Rosenthal’s turnpike billboard an “eyesore,” and said it hasn’t amounted to anything in the 20 years since it was installed. He expects the same could be said about Rosenthal’s latest push.

He said the messages on the turnpike, which in the past included imprints of hands representing the children and teachers killed in Newtown, Conn., in 2012 have helped drive the conversation about gun violence on a national level.

He said when the Fenway Center complex is complete, that conversation will be even more robust, because the building will be constructed over the highway and have more space for permanent signs.

“We are going to come back with a big, permanent billboard that will continue to keep this debate alive for the rest of time,” Rosenthal said. “There’s potential for the billboards to be the first and last thing you see coming in and out of Boston.” 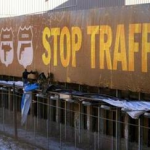