Funny: Does Hillary Clinton Suffer From A Rare Medical Condition?

Funny: Does Hillary Clinton Suffer From A Rare Medical Condition? May 29, 2015 RadioGuyJoe
Uncategorized 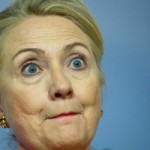 Politicos and voters alike were mystified when Democratic presidential candidate Hillary Clinton, who was born and raised in Illinois and spent two decades living in New York and Washington, D.C., suddenly adopted a Southern twang during a campaign stop in South Carolina. But now, The Daily Caller believes it’s located the cause of the accent shift. After spending literally minutes poring over Wikipedia, The Daily Caller believes there is a strong possibility Clinton is suffering from Foreign Accent Syndrome (FAS). FAS is an extremely rare neurological disorder “in which patients develop what appears to be a foreign accent.” Wikipedia gives an example that sounds eerily similar to the episode Clinton suffered Wednesday: “an American native speaker of English might sound as though he spoke with a south-eastern English accent, or a native English speaker might speak with a New York American accent.” – See more at: http://americanactionnews.com/articles/is-hillary-clinton-suffering-from-a-rare-medical-condition#sthash.9q8iJe1w.dpuf