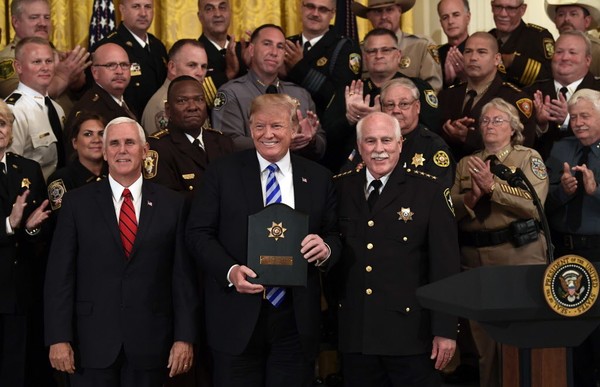 Hey folks… great talk with Thomas M. Hodgson of the Bristol County Sheriff’s Office on this morning’s show… you can hear that portion of the show now!

And all the past shows and interviews anytime on our site.

Hour Two – Joe is joined by Bristol County High Sheriff Thomas M. Hodgson as ICE agents are dispatched to Boston and over 700 counties refuse to cooperate with ICE..Sanctuary cities

Hodgson was appointed Sheriff of Bristol County by then-Governor William F. Weld on May 21st, 1997. In the most recent election he ran unopposed.

The Sheriff got some recognition in 2017 when discussion on illegal immigration and sanctuary cities got a lot of attention.

Hodgson first made waves by offering to send Bristol County inmates to help build President Donald J. Trump’s proposed border wall. He was later invited to speak to the House of Representatives on issues relating to sanctuary cities, stating that elected officials in such jurisdictions should be placed under arrest.

Trump Re-Election Campaign In November 2019, President Trump appointed Hodgson as Honorary Chair of Trump’s 2020 Massachusetts re-election campaign The announcement was made by MassGOP National Committeeman Ron Kaufman at a state committee meeting in order to stop rogue players from hijacking Trump’s popularity in the state for their own agendas.