Everyone should be knowledgeable on  this subject… Clerks decide what cases are heard February 13, 2018 RadioGuyJoe
Uncategorized 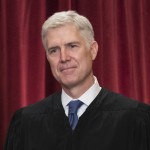 FILE – In this June 1, 2017 file photo Supreme Court Associate Justice Neil Gorsuch is seen during an official group portrait at the Supreme Court Building Washington. Gorsuch’s first Supreme Court opinion Monday, June 12, 2017, stayed true to what Gorsuch promised in his nomination hearing and to the reputation for good writing he developed as an appellate judge. (AP Photo/J. Scott Applewhite, File)

I found at least 10 verified reports from May 1, 2017 and beyond that verify this action by SJ Goruch .ONE OF THE MOST ENCOURAGING EVENTS SINCE TRUMP TOOK OFFICE WERE U AWARE OF THIS?  I WAS NOT

YOU WILL NOT SEE, OR HEAR, MUCH ABOUT IT EITHER IN THE PRINT-PRESS, OR ON TELEVISION….

Neil Gorsuch has only been on the Supreme Court for a short while. Recently he ignited the fire of liberty and broke 40 years of precedent when he refused to join the SCOTUS “cert pool.”

The cert pool was established in 1973 during the early days of the Burger Court, in order to efficiently review the near 8,000 petitions received each term.

In practice, the petitions are apportioned among the Court’s law clerks, who then circulate a memo to the justices recommending a grant or denial.

The obvious problem here is that this gives the power in these 8000 cases to the law clerks instead of the Justices.

It also, in theory, allows 3rd parties to unfairly influence a case through the clerks.

That is NOT how the Supreme Court was designed to operate. Neil Gorsuch just managed to set his foot down in the Supreme Court and say it is NOT okay to pass off judgments to the discretion of legal clerks. This is the kind of story everyone should be hearing or reading in the media, but obviously we are not.