The following comment from an American Observer who viewed the illustrations above;

“This is a quantum leap above anything we have on the drawing board. They have thought “outside the box” on this one. Better speed, larger capacity, much more stable, etc. Definitely a “blue-water” long reach vessel. Plus they can service their nuke sub fleet in-between the twin hulls (sight unseen) or even launch amphibious ops from same. It will be launched in half the time it takes the USA at just one-third the cost. Add the new Chinese stealth fighter bomber (naval version already flight-testing) in the mix and you have the makings of a formidable weapons system indeed. Also look at that extra ”parking and readiness” station between both hull structures. And of course the launching and landing capabilities from the utilization of twin flight decks at once.

Six of these vessels (two in the Pacific, two in the Atlantic, one in the Indian Ocean and one on the Mediterranean ) would be a pretty good diplomatic “big stick.”

Note: The Chinese are already drilling for oil off Cuba, Brazil and Venezuela. Can they build a fleet of these things?

A few facts: The Chinese have completed the world’s biggest dam (three gorges), the world’s longest over-water bridge (65 times as much steel as in the Eiffel tower), constructed a 15,000 feet and a high railroad into Tibet (all considered major engineering feats).

China is the only nation other than Russia that can launch men into outer space. They have also shot down a surveillance satellite (one of their own) from the ground. Plus, they “own our arses” in the international debt game.

China’s new carrier could be twice as fast as anything we have, plus the stability of a catamaran type hull will greatly reduce the pitching, yawing and swaying common to our present designs.

Still want to say: “Junk made in China?” 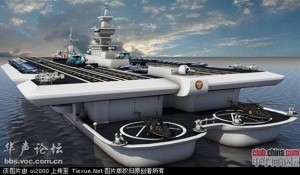 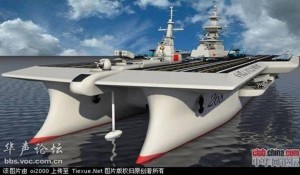