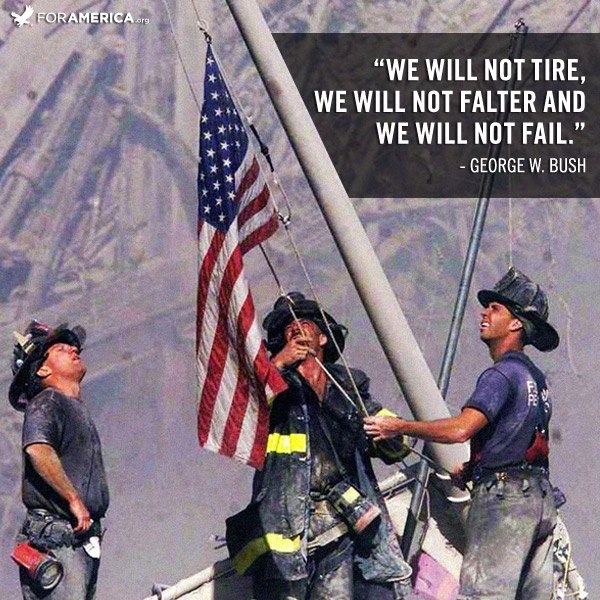 9/11 remembrance quotes remind us of a fateful day in 2001 where many innocent American lives were lost. When Americans read over the following 9/11 remembrance quotes, they need to really think about what happened. When the massive towers of the World Trade Center fell, America was brought to her knees. Immediately thereafter, we joined together. Patriotism and love for our country was at its best. People rushed to join the armed services.

9/11 remembrance quotes are needed so that we never forget what happened. As time has gone on we have slowly slinked back into our old ways. No one seems as proud to be an American as they were eight years ago. People are not flocking to join the army.

If the culprits are Muslim, they have twisted the teachings of Islam. Whoever performed, or is behind, the terrorist attacks in the United States of America does not represent Islam. God is not behind assassins.
— Muhummad Ali

Freedom itself was attacked this morning by a faceless coward. Freedom will be defended!
— President George W. Bush, September 11, 2001

We must not descend to the level of those who perpetrated Tuesday’s violence by targeting individuals based on their race, their religion, or their national origin. Such reports of violence and threats are in direct opposition to the very principles and laws of the United States and will not be tolerated.
–John Ashcroft, Attorney General

The following 9/11 remembrance quotes are inspirational. These words were uttered to help people cope with losses.

Not a day passes over the earth but men and women of no note do great deeds, speak great words, and suffer noble sorrows.

— Charles Reade
I know for certain that we never lose the people we love, even to death. They continue to participate in every act, thought and decision we make. Their love leaves an indelible imprint in our memories. We find comfort in knowing that our lives have been enriched by having shared their love.
— Leo Buscaglia

Whatever it is that I have lost (or must give up) I must grieve. If I do not do my grieving about the old hurts and insults, then, when I am faced with a here and now grief experience, I will end up having to dredge up all that old energy along with the current experience.
— Elaine Childs-Gowell

We never need to forget 9/11. Keeping these 9/11 remembrance quotes near to our hearts is important. We should not allow this fateful day to slip from our memory. In the words of Former President George W. Bush: “These acts shattered steel, but they cannot dent the steel of America’s resolve.”