18 Sailors Stand Absolutely Still. Then The Man In The Center Screams And They Move As One

18 Sailors Stand Absolutely Still. Then The Man In The Center Screams And They Move As One February 20, 2018 RadioGuyJoe
Uncategorized 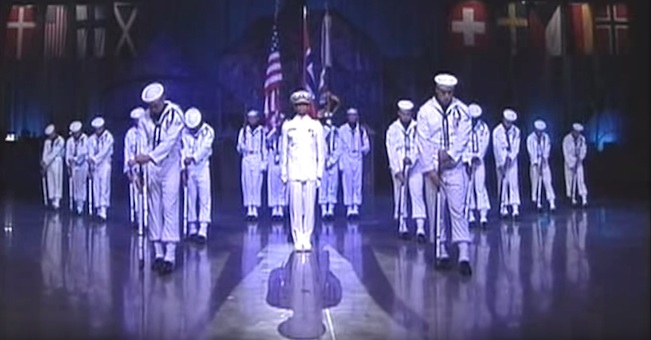 When the presidential ceremonial honor guard silent drill team was invited to compete in an international competition in Norway, you’ll quickly understand why. Even though they were going up against military units from all over the world and NATO, it was no contest and no surprise when the United States was informed that they won first place.

Established back in 1931, this ceremonial unit of the Navy’s primary mission is to represent the service in presidential, private, and public ceremonies in any way that helps show the world how skilled our nation’s warriors truly are. From inaugurations to arrival ceremonies for foreign officials, these men have trained for years in order to successfully perform under pressure.

Please make sure to watch the whole routine. These guys have worked for hundreds upon hundreds of hours in order to show to our country, and to the rest of the world, how incredibly elite our nation’s military prowess truly is. While the rest of the world likes to mock American exceptionalism, when it comes time to put boots on the ground, everyone else looks to us to defend freedom and prosperity to the world.

It’s no wonder that these men won first place, and with men like these defending our borders, we’re sure we’ll be collecting that first place prize for years to come. Great work guys!

Please SHARE this patriotic video if you think America is the greatest country in the world!